In the early 1950’s the world was full of survivors. Everyone had their own story about the second world war. Many people just wanted to get on with their lives. The UK was being rebuilt and a very different world was emerging. Some people didn’t like the direction the UK was going and decide to start new lives in Australia. A Town Like Alice is Nevil Shute’s response to that period and process. 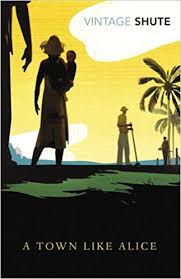 Jean Paget, a secretary in a leather goods factory, inherits a substantial legacy from her uncle. The money is put in trust until she is 35 – her uncle did not believe young women could be trusted with large sums of money – and it is managed by her solicitor, the novel’s narrator. Jean decides to use her windfall to repay the kindness shown her during the war by some Malay villagers, by building them a well. Jean is aware that the burden of manual work falls upon the women villagers, and she wants to lighten their load, describing the well as “a gift by women, for women”.

This idea leads to an extended flash-back in which she recounts her experiences in the war as a prisoner of the Japanese forces. She leads a group of women and children who are marched across the Malayan countryside. This route-march leaves many of the elderly and children dead of starvation, disease, and exhaustion. During this exodus, based on a true story, Jean meets an Australian soldier, Joe Harman. Joe is also a prisoner of war. He drives a lorry for the Japanese and wants to help Jean and her group. He steals food and medicines for them, but is caught and in a form of punishment said to be widely used by the Japanese he is crucified. The women are marched out of town to their next destination, believing that he is dead.

Back in the present, the well is built, and during its construction Jean learns Joe did not die. She travels to Australia to find him. She visits Alice Springs, the ‘Alice’ of the novel’s title, and is struck by the high quality of life there. (There is a constant emphasis in all her conversations with Australians about the poor rationed diet in the UK. Every meal Jean eats is opulent in the extreme. Shute is trying a little too hard to stress the riches of Australia). She journeys on to Willstown in the Queensland outback, where Joe is manager of a cattle station. Willstown is a shocking contrast to Alice – poor, struggling, almost deserted, with only one general store and a bar. The weather is always stiflingly hot. Joe meanwhile has been on his own journey to find Jean, travelling to the UK to find her once he realises she is single (she carried a toddler when they met, the surviving child of one of their party, so he assumed she was married. Despite Jean bringing this child up for three years he is handed back to his father and the end of the war and heard from no more.)

The third section of the novel records Joe and Jean’s relationship and marriage, and Jean’s attempts to turn Willstown into a ‘town like Alice’. She uses her legacy, which originally derived from gold-prospecting in Australia, to bring life back to the town, opening a small leather goods factory, an ice cream bar, and a number of other businesses. The novel closes three years on with the expansion plans coming along nicely, with Willstown flourishing.

In some respects Alice is a fairly progressive novel. The lead female character is strong and independent, demonstrating that her uncle’s concerns about women’s ability to make business or financial decisions were unfounded. She deals with the trauma of the war in a no-nonsense manner. The Japanese are portrayed as largely honourable soldiers, with the guards helping to carry the children among the party during their long journey. Shute also makes a persuasive case for inward investment into Australia, positioning it as a return for the use of the country’s resources.

But elsewhere the novel’s attitudes towards racial issues will be to a modern sensibility. Aborigines are described using pejorative, insulting terms. They only speak pidgin English, and are given menial jobs suited to what the author appears to believe is their limited intelligence. Aborigines and white people are segregated even in the consumption of ice-cream – Jean’s ice-cream bar has separate rooms for while and aborigine customers. A mixed race marriage is described as a source of humiliation. The earlier war section of the novel is more progressive in its description of racial characteristics. Jean adopts Malay ways of dressing and behaving because they are suitable to her situation, and is quick to abandon expat attitudes and behaviours, particularly the assumption of superiority. She bargains with a Malay village leader citing the Koran to make her point and offering to help with the rice cultivation. It is interesting that Joe behaves differently towards Jean when she is wearing Western dress – he can’t touch her – but when she puts on a sarong she is left bruised by his ‘ardour’.

At its heart Alice is an optimistic book – the war leaves its mark on survivors, in Joe’s case quite literally – but they come through it into a period of prosperity where technology and modernisation holds all the answers. If only Australia’s problems were really all that simple.